FREE SHIPPING ON ORDERS OVER $200! NO RETURNS ON SALE/DISCOUNTED ITEMS. 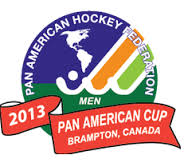 Going into the Pan American Cup in Brampton, Ontario, we had the youngest team in the tournament. The team knew that it would be a big task to come out on top, especially when competing with top class teams like Argentina and Canada, but the team was eager and up to the task. The team was placed in Group A, which was comprised of Argentina, Uruguay, Mexico, and the USA. The team won two out of three of the games, the loss coming from the game against Argentina, which gave us 2nd in the pool and a match against Canada in the semi-finals. It was a hard fought game and each side played at the same level. Despite numerous chances, the team fell 1-0. With the result, the team would fight for the bronze medal against Trinidad & Tobago. Unfortunately, it was taken from us and we had to settle for 4th place. Although it was a disappointing finish, we gained experience and grew as a team. With the Pan American games coming in 2015, our youthful team is looking to train hard and gain experience for the next two years to ensure that we play in the final and take home some hardware.